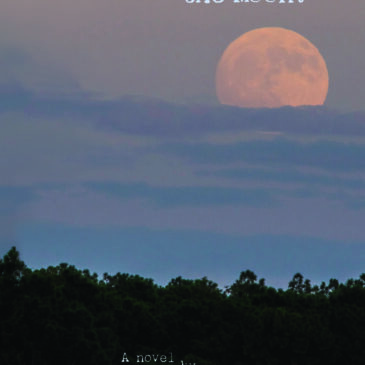 “Blinding the Moon” is a hand-numbered Limited Edition release, Marti Healy’s ninth book, her third novel, which features a unique approach for her relative to story development. It is structured around the highly fictionalized yet real life experiences of two of her friends: Chad Mitchell, former folk singer with The Chad Mitchell Trio, and photographer/storyteller/former rail-rider Dale Wickum (whose own work can be found on the website “Following the Tracks”).

The book is set in the 1970s, a distinct era which, for some, was a decade known iconically as “sex, drugs and rock and roll.”  In Healy’s version, however, it’s more like “betrayal, jail time, and folk music.”

In “Blinding the Moon,” the lead character is struggling to come to terms with his past as well as his future, his childhood along with his manhood.  Through a series of flashbacks and desperate running, confinement and release, catching out on freight trains and racing in solitude on foot, he comes to Taos and begins to reclaim his soul and find his truth among the pueblos and people and natural world he encounters.  Until a sudden, singular moment of lost-and-found brings him home and eventually brings him to peace.  All under the allegorical gaze of the moon.

Although not her typical subject matter, the style of writing is Healy’s trademark narrative – bringing the reader into the story experientially, carrying them into all the sights and sounds and feelings of the characters, settings and situations.   It is written lyrically, to respect and reflect the cadence and rhythm and music of life.